Pathologic 2 is an upcoming remake of the 2005 version of Pathologic. The game is developed by Ice Pick Lodge and will be published by TinyBuild Games. The release date has not yet been announced but is expected to be in 2018. This wiki is a collaborative resource for the Pathologic franchise and is maintained by the contributions of the fans. Feel free to use our Discussions to discuss gameplay. All editors are welcome. Come join our community!

Help • Terms of Use • Wanted Pages • Administrators • Categories
The Pathologic Wiki is a collaborative resource about Pathologic that anyone can edit. We are currently editing over 14 articles, and 47 files, and you can help!

Pathologic is a psychological horror adventure survival role-playing video game that originally released in 2005 for Windows, PS4 and XBox One. It follows three characters trying to uncover the source of an unknown illness known only as the 'sand plague'. All three characters are playable and each give a different perspective on the dismal situation. There are secrets that can be discovered by each character. The game takes place in a 12 day in-game time frame and at midnight, any quests not completed are wiped from the player's log. The goal is to survive all 12 days which can be quite a challenge with the game's ever fluctuating economy and limited resources. 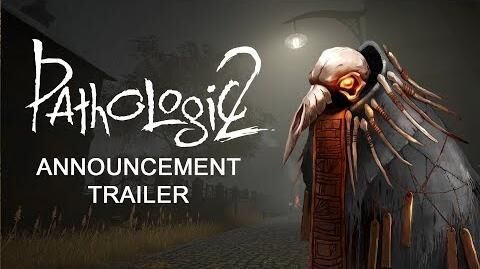 The Independent Gamer: 'It Takes Two' Director Josef Fares on Being Inspired by "The Urge of Doing Something T  Hollywood Reporter...

Retrieved from "https://pathologic-archive.fandom.com/wiki/Home?oldid=4251"
Community content is available under CC-BY-SA unless otherwise noted.