Artemy Burakh - also known as the Haruspex - is the only child of Isidor Burakh. He is one of three playable characters in Pathologic. Artemy is deeply rooted into his family's folklore and traditions. After receiving an urgent letter from his father, Artemy returns home to find his father dead. He then gets blamed for the murder of someone else and has to fight to restore his name.

Artemy has no special weapons or unique abilities. He can only use what he finds in the game. He is a sage and is the only playable character who can remove organs from dead bodies. He can trade organs with the hunchback for medical supplies. He can also gather herbs and trade them with Worms. He inherited a distiller from his father and can use both organs and herbs to create healing potions.

Due to the fact that he is a sage, he is unable to allow the dead in his family to have unfinished commitments. His goal for each day is to create a Panacea in the hope of being able to cure The Town of the plague that infests it. 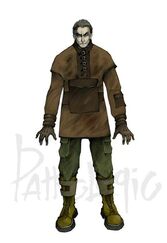 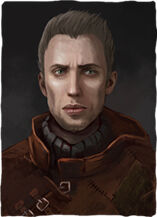 Pathologic tabletop card art
Add a photo to this gallery
Retrieved from "https://pathologic-archive.fandom.com/wiki/The_Haruspex?oldid=4219"
Community content is available under CC-BY-SA unless otherwise noted.